As I recounted in the first post in this series, it took me several years after I first discovered prostate orgasms until I learned to be able to have them on a regular basis. But what exactly is a prostate orgasm?
For that matter, what exactly is an orgasm? It is important to understand, first of all, that, even in men,* orgasm is different from ejaculation. It is possible for a man to ejaculate without experiencing the sort of pleasure we associate with orgasm, and it is also possible for a man to experience the pleasure of an orgasm without ejaculating. Importantly, these “dry” orgasms typically are not followed, as ejaculatory orgasms usually are, by a “refractory” phase, during which sexual arousal is essentially impossible, no matter how much additional sexual stimulation one receives. That is, while “dry” orgasms do release some sexual tension, they do not release of all of it. Additional stimulation will increase arousal, and one can have another “dry” orgasm very shortly afterwards. Men who have these sorts of orgasms are thus able to have multiple orgasms, much the same way that many women are.
There is a good deal of debate within the medical and psychological community about how orgasm should be defined. Everyone agrees that orgasm involves both physiological and psychological components: certain sorts of rhythmic contractions of muscles in the pelvic region, and an intense experience of sensual pleasure. The debate centers on which of these really is the orgasm: the physiological part or the psychological part? We know the two can come part. So the question is: Can you have an orgasm without feeling it? If the orgasm is the physiological response, then you can. If it’s the psychological response, then you can’t.
For our purposes, it doesn’t matter very much how this question is answered. What does matter is that the two components of orgasm are closely related. Part of what feels so good are those rhythmic muscular contractions. Who knows why, but we humans experience them as extremely pleasurable. Anything that triggers such contractions, then, will thereby trigger at least part of the experience of orgasm.
And it turns out that one way to cause such contractions is to stimulate the prostate. A prostate orgasm, then, is simply an orgasm that is brought about through stimulation of the prostate.
My own experience is that prostate orgasms feel very different from ejaculatory orgasms. Part of the reason, I’d guess, is that many groups of muscles are involved in orgasmic contraction. Probably one of the reasons different orgasms can feel so different is that different groups of muscles are involved on different occasions. It wouldn’t be surprising if only some of the muscles that contract during ejaculatory orgasms do so during prostate orgasms. That does not mean that they feel less good, but only that they feel different.
More interestingly, many men say that prostate orgasms have a “whole body” quality that ejaculatory orgasms usually lack. Indeed, men often describe prostate orgasms in ways that sound very much like how women describe their orgasms. In my case, prostate orgasms are not centered on my penis and testicles, the way that ejaculatory orgasms usually are. Rather, they feel as if they start deep within my pelvis and then spread throughout my body, enveloping and enfolding me with waves and waves of pleasure.
Many men also report that prostate orgasms last longer than ejaculatory orgasms. Scholarly consensus is that ejaculatory orgasms, for most men, last about 10-15 seconds. A typical prostate orgasm, for me, seems to last about 20 seconds, and it is not at all unusual for them to last 30 seconds or more. I have had prostate orgasms, in fact, that lasted for over two minutes, and some of these ended only because I felt so overwhelmed that I had to stop.
And, as said earlier, most men find that they can have multiple prostate orgasms, because there is no, or only a very little, “downtime”. In my case, I often feel as if I need a rest, simply because the orgasm I’ve just experienced has left me somewhat drained. But sometimes, it leaves me energized, and I am able just to keep stimulating my prostate, so that a second orgasm may follow the first within thirty seconds or so. I don’t think I’ve ever had more than three orgasms in a row like that. )By then, I really was ready for a rest!( And I often find that, even if I do pause in between, if I’ve had a few orgasms from one kind of stimulation, I need to switch to something else if I’m going to continue. Fortunately, there are a lot of different ways to stimulate the prostate, so you have a lot to choose from.
There’s another kind of anal orgasm I’ve experienced as well, and which is worth mentioning here, especially because it is a kind of orgasm that women too can enjoy, since it doesn’t involve the prostate. I call it a “peristaltic” orgasm. Peristalsis is the process through which contractions conspire to move something through a tube. It’s peristalsis, for example, that moves food and then waste through the intestines. And it would seem that at least some of the muscles that are involved in peristaltic processes in the rectum are also involved in orgasm. So, again, if you can find a way to trigger those sorts of contractions, you thereby trigger at least part of the experience of orgasm. 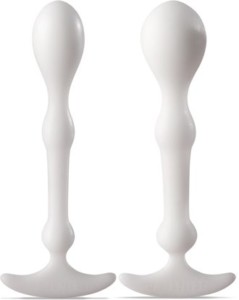 The only way I know to achieve peristaltic orgasms is with the Peridise anal probe, from Aneros. These are very tiny little toys. They come in sets, with four different sizes. They’re all just a few inches long, with a small bloop at the end )from 5/8″ to 7/8″( and two even smaller bloops along the shaft. They’re thus very easy to insert and small enough for anyone to use. The larger ones are a bit easier to use, but the smaller ones, strangely, are more powerful, perhaps because they force your muscles to work a bit harder to grab onto them.

You “activate” the Peridise by doing something very much like a Kegel exercise. Instead of really clenching your PC muscles down hard, though, you squeeze them just about half way. There is no way you can actually hold that position exactly, so what happens is that the muscles rhythmically clench and release themselves, just a bit, thus moving the Peridise back and forth in your rectum. This feels pretty good in its own right, as the Peridise gently massages your insides. If all goes well, however, your rectal muscles will realize there is something there for them to grab onto, and they’ll start to do that of their own accord. And once they do, they’ll decide they need to move that thing along, since that’s they’re job. And that means peristalsis, which just happens to feel amazing. 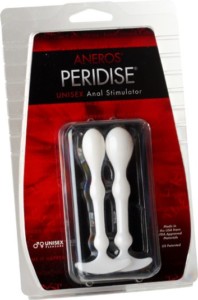 This technique can is be used with certain sorts of prostate massagers, such as those in the Aneros line and some of the Nexus toys. But there are a lot of other ways to do it, too. I’ll discuss those the next few posts.

* When I speak of “men” and “women” here, I generally mean anatomical males and females. This use of the terms is not meant to offend men and women whose bodies do not match the usual gender expectations. As I’ll explain in other posts, I’m a gender-queer myself.